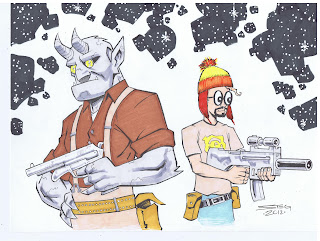 Well the Kickstarter campaign is going great so far! Just 29 days to go and a little over $800 to go to goal. I'm hoping I can surpass goal by quite a bit, and get a few other cool Goyle things made!
So please, share this if you can. Blog it, tweet it, Facebook it. Whatever you can do to help spread the word.

Thanks all!
Posted by Mark at 6:44 PM No comments: 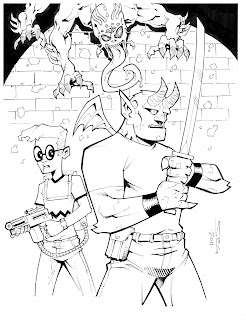 "Listen, do you smell something?"

Today is Creator Owned Day on the web. people are touting their own creations to raise awareness that there are lots of cool things out there, that arent owned by the big companies.

These are my characters, Dr Goyle, and his sidekick, Wilbur. They are mine. I created them. I write, draw, ink, and letter their adventures. They will be appearing in all new issues this year. Their first issue will be premiering at SpringCon in Minneapolis in May. I will have issues at all the cons I appear at this year.

If you like your adventures in the vein of Scooby-Doo, and the Tick, then this is the book for you. Check it out!

Happy Creator Owned Day!!
Posted by Mark at 7:55 AM No comments:

Soooooo, yeah, it's been 5 months since I last posted something. I have been kind of busy. The artwork above are the covers to 2 of the projects I have coming out this year. I am the inker of WIll Caligan's Gun Ghoul book, and I am the writer/artist/letterer of my creation , Dr Goyle. Gun Ghoul will be coming out in June at Philly Con I believe, and I plan to premier Dr Goyle at Springcon in Minneapolis in May. Add on a few other projects here and there, I am quite busy with projects. It's nice working on my own projects, cuz I don't have to worry about getting screwed over by anyone but myself.

This leads me into the situation involving Gary Friedrich and Marvel and Ghost Rider. Gary created Ghost Rider. Marvel says yeah, but you did it as work for hire. Therefore, you get nothing, and by the way, you can't claim you are his creator. People have been arguing about creator's rights for a while. IMAGE Comics was formed for that very reason. At the time of Ghost Rider's creation, both parties didn't cover their asses. But who knew that almost 40 years down the line a movie would be made about the character. But lets give Gary his credit. He created the character, give him some dough to live on, and call it a day.
I see lots of young talented folks at cons, showing their stuff to publishers, especially Marvel and DC. They think they have the next great character for them, little knowing the second that character is published by those companies, that character is theirs.

Do yourself a favor kids, create your characters, make your own comics. That way you keep them for yourself. You may not make any $$ from them, but neither will anyone else.
Posted by Mark at 5:30 PM No comments:

Coming up on October 30th, a ver special auction will be held. It is called the Women of Wonder Day and it benefits domestic violence shelters. I have 2 pieces in the NJ auction.


There web page can be found here:

Please go check out the page and bid. The funds you raise help our mothers, sisters, daughters, cousins, and friends. 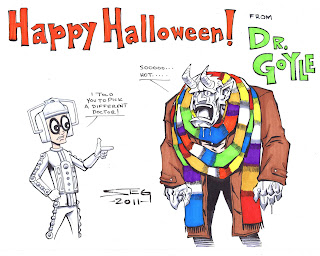 Happy Autumn everyone!!! Lots going on here. Moved back here to Madison just last month, and have been helping Mom take care of things here at the house. Been good seeing lots of all friends again after a several year absence.
Going to Minnesota this weekend for my annual trip to Fallcon! I love the shows the MNCBA puts on every spring and fall. Lots of good friends and fans as well. I will have a special exclusive print, seen above, for the show.
Dr Goyle is slowly getting done. It's been a lot of work so far. Coordinating artists for pinups, writing, penciling, inking, lettering. I forgot how much time it all takes. But still looking for releasing 4 issues by the time Philly con rolls around next June, that gives me 7 months to get 4 issues ready. I think I can do it. This first issue will be the hardest, but only because I haven't penciled a comic in quite a while, and getting used to the characters is taking a bit. But in the end, it will be totally worth it.

Holy crap, what happened to summer?!

Yeaaaah,....its been a while since I've posted. I know, I'm a fail. But it's not like I haven't been busy doing stuff. Let's see, what have I been up to? Well, I did a few shows this summer. In June I hit Wizard World Philly, in July I was at CONvergence, and in August I was at Wizard World Chicago. All great shows that wore me out.
I managed to get a few projects done. Saw the first issue Of Grimm get published. Waiting for pencils for issue 2, Bat is kinda slow. Hurry up dude!! Finished up the Marlow: River of Symbols graphic novel, and it saw print for SDCC. A wide release will be done for it in Jan/Feb of '12 according to Arcana, So I can't wait to see that. Am going to be finishing up a project for my pal Amber Delaney, aka Amber Unmasked. She's an East Coast cosplayer who does a lot of charity work for various things. SHe asked me to ink a 10 page story for a charity book coming out later this year. It's pretty fun so far.
The big comic project for me will be the return next year of my character,..Dr Goyle. I created him back in 99 with Mike Norton. We did a one shot at Arrow, and then an 8 page story for SLG a year later. He's been at the back of my mind for a while, itching to get out. Will, my editor at Alpha Dog, really pushed me to do a book for this year. So I thought about it, and made the decision to bring the Doc out of hiatus. I will be doing 4-6 issues, leaning more toward 6 right now. I will be writing, pencilling, inking, and possibly lettering. It wil be in color, and I hope to have a few issues ready for Philly next year, maybe even for Springcon in May. I'm really excited to do this project, and have enlisted some friends to do some pinups for each issue. Should be some good looking stuff!
On other fronts, I am moving.....again. Roomie decided not to renew the lease, and since the few hours I was getting at work have made it difficult to afford a place on my own around here, I needed another option. So I'm moving back home. Mom is looking to sell the house next year, and could use my help. So as of next weekend, September 10th, I will be once again back in Madison. I managed to get a transfer to a Best Buy store right across the street from where Mom works. This will make it great to carpool when our schedules are similar, and even better when the weather is bad. I'm sad about leaving friends and co-workers behind, abut I have oodles of friends in Madison who I haven't seen in 8-10 years that I look forward to seeing. This will also give me a chance to get debt paid off and actually save $$ for a possible move to the Twin Cities next year. We shall see what transpires.
So life once again is kinda crazy, but still good.
Posted by Mark at 8:25 AM No comments:

Wow, hard to believe that Memorial Day is here already.Seems like it was just the first of the year, time has gone by too quickly. But lets not forget those who have made the ultimate sacrifice to allow us to do the things we love to do.

Wizard World Philly! You knew I was heading there didnt you. Did the banner give it away?

I will be there along with Will Caligan and Bat Hilliard, my studio mates and cohorts in crime on Grimm. We will be doing sketches, and I will have prints and originals for sale. If you live in the area, come on out and see us!!

Other than that, Not much going on. Springcon was a blast as usual, kinda wish I wasnt so busy that I couldve gotten away from the table to see people. But there is always Fallcon in a few months.

Until next time!
Posted by Mark at 9:35 AM No comments:

Mark
Madison, Wisconsin
I draw comics when I'm allowed.Which is quite often. I guess people think I'm good at it.

Other Places I'm At